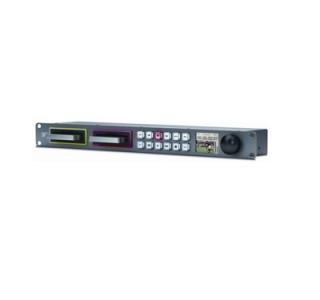 Blackmagic Design HyperDeck Studio is a single-rack-unit, VTR-like device that has dual slots for 2.5" SATA solid state disks (SSDs). HyperDeck Studio captures and plays back uncompressed 10-bit SD and HD QuickTime files, making it a versatile piece of gear that could land a starring role in workflows ranging from production to playout.

The promise of recording uncompressed 10-bit HD QuickTime files via HDMI or HD-SDI to portable, hot-swappable, relatively affordable media is probably quite apparent already. Suddenly, capturing clean, uncompressed VFX shots in the studio is within the reach of the independent auteur with a compact professional camcorder – so long as it has an HD-SDI or HDMI output, as almost all of them do.

Then, while the shooting continues, that SSD drive can be pulled and instantly mounted to any laptop with a standard eSATA dock, for immediate, direct access to the footage. Open your effects program and try to pull a key before copying any files; if the shot didn't work, you'll know right away, while the actors are still standing in front of the green screen. Moreover, instant client preview is as easy as connecting HyperDeck Studio to an HDMI- or SDI-enabled projector. With hot-swapping and relay recording between the two SSD drives, there are no temporal constraints on your workflow.

HyperDeck Studio's utility extends much further than the soundstage, of course. With familiar VTR-style controls including a jog/shuttle wheel, an RS-422 deck control input, a sync input for blackburst & tri-sync, and an LCD screen for local monitoring of video, audio & time code, the deck is ready to be fully integrated into a facility's video infrastructure, for playing out to air or feeding a switcher for live events.

Note! The HDMI output from DSLR cameras such as the Canon 5D/7D and Panasonic GH2 is intended for monitoring only, not for recording. 2.5" SATA SSD drives are sold separately. Off-the-shelf SSDs can be used as long as they are fast enough for uncompressed 10-bit capture (158 megabytes/second is required for 10-bit uncompressed 1920 x 1080 @ 29.97fps).

Perfect Quality
Compression destroys image quality. Now you'll never need to compromise your quality or your creativity, because you can bypass the camera compression to get perfect uncompressed 10-bit SD/HD video. Create the sharpest VFX plates for match moving, compositing, and more, using affordable professional camcorders. Get deep dynamic color range for color correction and do perfect keying without jagged edges caused by compression, even on shots like hair and multi-colored patterns

Connect to Anything
With SD/HD-SDI and HDMI inputs and outputs, HyperDeck Studio works with virtually every camera, deck, and monitor. Effortlessly plug into monitors or televisions for instant on-set preview. Use HyperDeck Studio as the video playback source for digital signage systems or switchers and as a fantastic replacement for a broadcast deck. Chain several units together via the SD/HD-SDI loop to record multiple copies simultaneously. HyperDeck Studio also comes standard with a USB connection for firmware updates and settings

Open File Format
Why be locked to using just one NLE or color grading system with a proprietary codec that could become obsolete at any time? HyperDeck Studio captures universally compatible uncompressed QuickTime files that can be used with all popular software packages like Final Cut Pro, Premiere Pro, After Effects, Resolve, and Apple Color, both now and into the future. You're always free to use the editing, color correction, and finishing tools that you choose, and that are best for your clients and your jobs. That's a true open format

Faster Cost-Effective Workflows
HyperDeck Studio improves nearly every step of your production workflow pipeline. For quick on set QC or client preview, connect HyperDeck Studio to a projector or television via the HDMI or SDI outputs. You can even edit directly from the SSD with no digitizing or file copying. Simply plug the SSD into your laptop or desktop via a standard eSATA dock. Motion graphic artists can line up VFX plates in full 10-bit uncompressed quality, right on location. SSDs are not much bigger than a credit card, so they can be sent anywhere in a simple overnight shipping envelope

Record Forever
HyperDeck Studio uses two hot-swappable SSDs for perpetual recording, letting you record virtually forever. If you run out of space on one disk, it automatically switches to the second disk with no manual intervention required. The first drive can then be conveniently replaced while recording, ready to take over again when the second disk is full. You can "hot-plug" disks at any time without fear of lost media. For ultimate peace of mind, reliable frame-by-frame autosave ensures you won't lose media, even if an active drive is accidentally pulled while recording

Familiar VTR-Style Design
HyperDeck Studio is a tape deck for the 21st Century. You get a user-friendly VTR-style design with function control, a knob for jog and shuttle, plus an external RS-422 control. The high-resolution LCD screen displays time code and transport information, plus a full color thumbnail preview of the current clip in record and playback. That's perfect for broadcast, post-production, live production, and more. HyperDeck Studio is extremely affordable, so you'll never be caught waiting to use an expensive broadcast deck again. Controls include Record, Play, Stop, Fast Forward, Rewind, Next Clip, Previous Clip, Remote, Jog Shuttle, and Input Check

Space-Efficient Design
At a single rack unit and less than 4" deep, the HyperDeck Studio has a beautiful and solid design with an integrated LCD for playback status and video preview. Beautiful crystal-look buttons give you full transport control. The streamlined HyperDeck Studio fits easily into an outside broadcast van or master control room. It's perfect for on-set recording and viewing of dailies, as a video server, or for replays at live events. You can swap and change SSDs for playback of a massive library of clips and video. HyperDeck Studio is low power and operates totally silently

Reliable Time Code with Options
You can rely on HyperDeck Studio to capture with frame-accurate time code. Enjoy the ultimate in flexibility with real time code options, virtually the same as you remember from broadcast decks. You get support for preset time code, regenerate time code from the last recorded clip, or SDI time code, all of which can be set via the included HyperDeck Utility. HyperDeck Studio even includes capture of metadata for integration with NLE software

Shock-Resistant Up to 1500 G's
With no moving parts, SSDs are unbelievably robust and can easily handle shocks and vibrations that would destroy conventional hard drives or videotapes. SSDs are shock-resistant up to an amazing 1500 G's. That's like driving a car into a wall at 185 mph 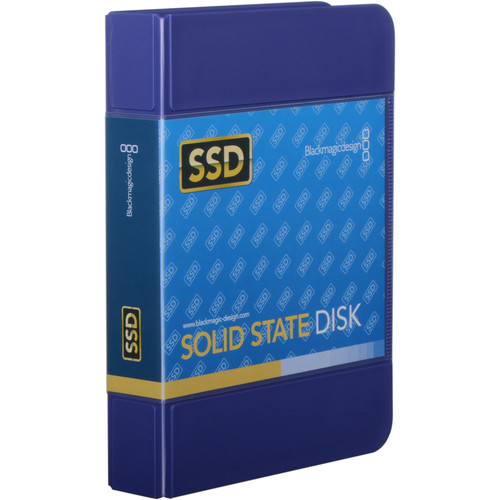 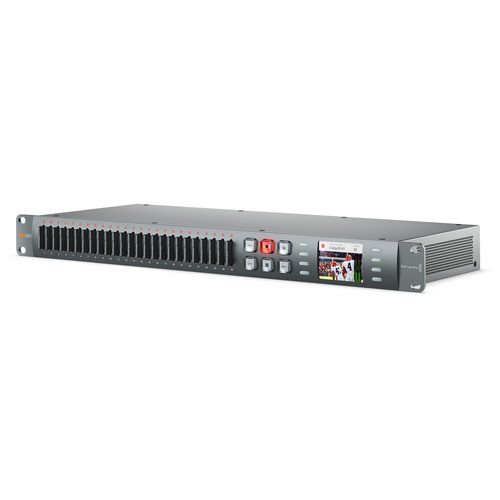